Massagrans have started creating their own comics online from some dialogues their teacher handed in. They have chosen the characters, the kind of ballons, the number of panels they needed, the background that fitted best for their story, and so on. The result is amazing. You can watch some of their jobs online. The album will remain in class for they and others students to consult.

We have played bingo this week, learning some essential vocabulary while playing. There were five groups and they worked together really well.

A fun game where the winners get to shout “Bingo!” at the top of their lungs.

Playing this game has helped us to implement and practice some of the essential language skills as reading, listening and speaking.

We have created the first chapter of our book, it will remain in class, so children will be able to read it. You can take a look at the presentation below. Cast will be different next time and also the items from the pizzeria. This time was the first visit of a family to the restaurant and they only ordered drinks. To be continued…

We made our own pizzas adding to the base some ingredients, like tomatoes, mushrooms, salami and cheese. Afterwards, we visited a real pizzeria to know how they make their pizzas, and if they do as we already had learnt, but the real pizzas were this time yummy, really delicious! An explanatory video showed us how to do it, and the one of the pink panther made us laugh out loud.

Pinotxos have explained that they have been working on dinosaurs for a while now, and they already know a lot about. They explained that there was a meteorit that destroyed the planet, and they know quite a lot of names of different dinosaurs, the most important for them is the Tyrannosaurus Rex. We have learned some of their names in English and what happened to them, where did they go…, it’s long story, and funny in this way.

Where did the dinosaurs go? Did they go to the space or to the North Pole? There was a dust cloud in the sky after the meteorite impact. So how did it go? The sunlight was blocked. Oh, really? So there was nothing to eat. Oh, no! This is why dinosaurs disappeared, long, long time ago.

We are carrying on working on climate. It’s not just knowing what is climate change and what causes it. What is really important to us is what we can do to make less CO2 into the air. Here are some examples: walking, cycling, swithching off lights or the TV when not using, buying local food…

You can find below a video and part of some of the activities we have done in class.

We have watched a short story and some others videos about our emotions and feelings to understand better the volcano that is inside each of us. We have learned how to name emotions and feelings in English. Recognising and discussing feelings allows for the development of good communication skills and empathy with others.

We have been watching a video of Harry Potter while asking questions and giving answers as it can be seen above. Students liked it. Another funny way of learning English using new technologies in class.

At the end of the last year, each student of Massagrans’ class sent a letter to a student of one of the classes of the first year of secondary school. Each of them sent it to a different student.
We have had their answers today. A nice and interesting first approach towards their future schoolmates, getting from them some news about the High School. Among other questions, they asked about the building and the playground, the school subjects, the teachers, other schoolmates… 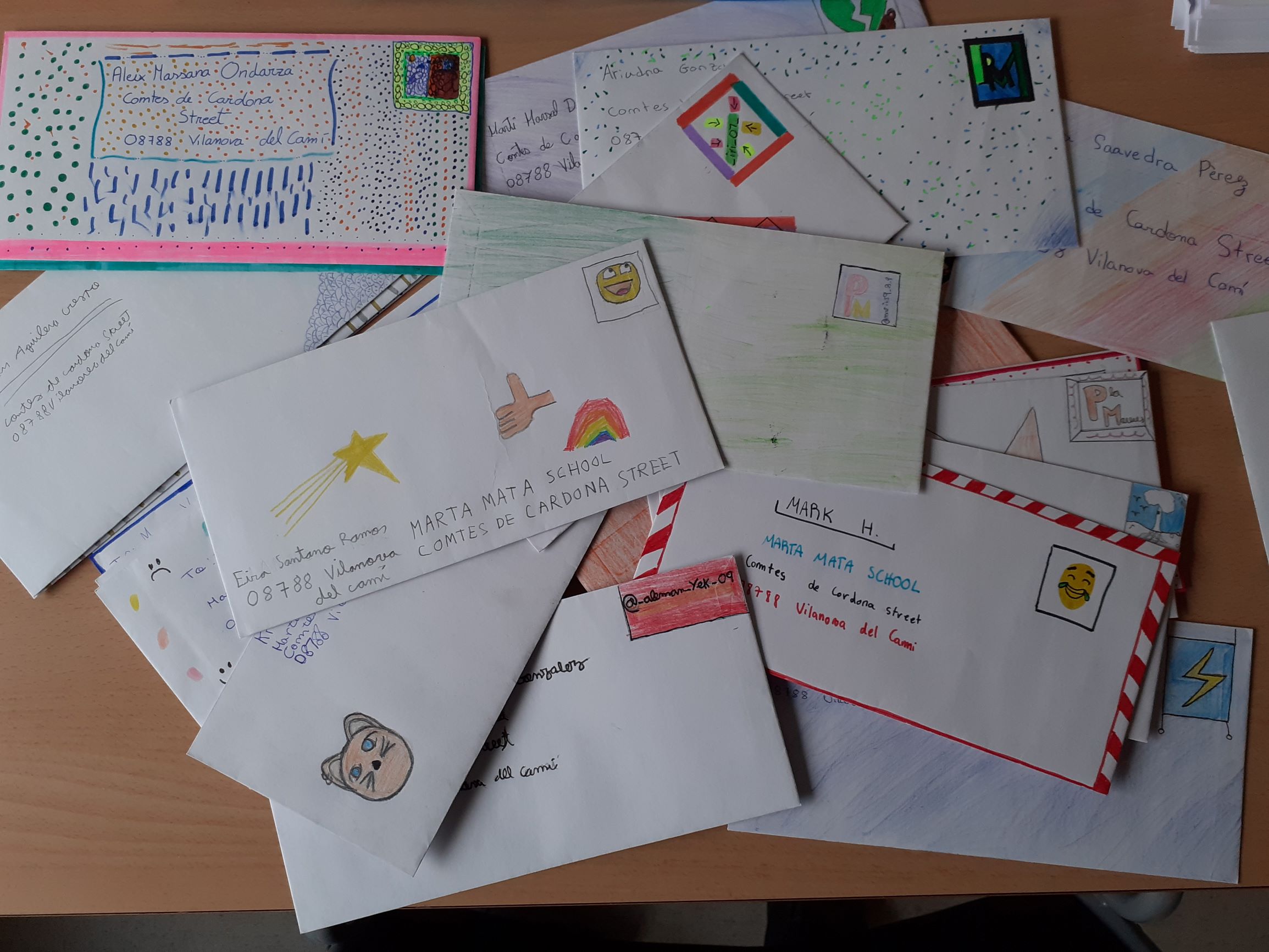 Tintins, Petits Prínceps and Massagrans have explained their week away. In a first activity, we all translated in to English the scheduled activities of their trip to Valls d’Àneu. We wrote every single thing they had done the previously week together. Following their descriptions, the next activity was to reorder the sentences, starting from the morning of the first day when they met before 8 am at school to get a bus to their destination, and finishing when back to school on Friday evening.

A meaningful activity in fact, as it is something they have already done themselves, and it is in their living memories, remaining vivid pictures in their minds, easy to understand when translating to English. 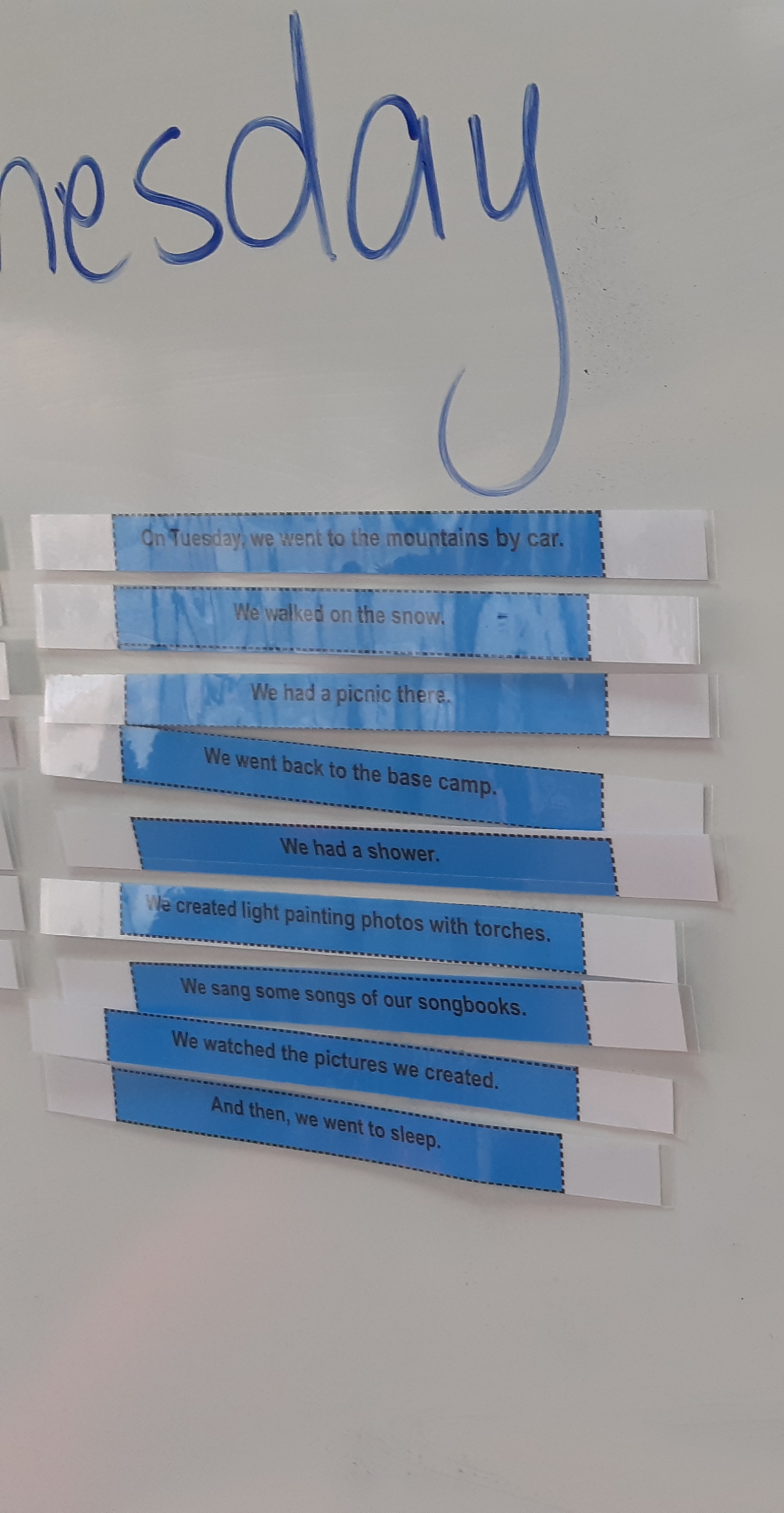