On Monday 4th February, the students of 2nd, 3rd and 4th Eso wento to Ateneu Igualadí in Igualada to see the play “Dracula”. There were four characters: Jonathan Harker, Count Dracula, Mina Murray and Van Helsing. The story begins with Jonathan travelling to Transylvannia by train. He needs to give some documents to the mysterious an rich count Dracula. Mina Murray is his clever and very attractive fiancée, who he has left behind in England. Then, strange things begin to happen and the characters need to take important decisions to save lives. The story  escapes from the traditiional plot and gives  the play a touch of modernity and originality.

At the end of the play, some of us had the opportunity to ask questions to the actors, which they answered very kindly. They also congratulated us for being such a good audience and pupils really had a great time. 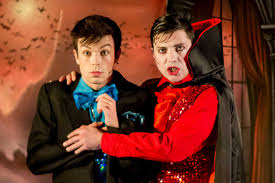