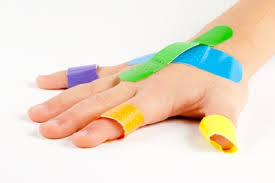 1.- Look at the picture of accidents and injuries and match them with the phrases in the box. 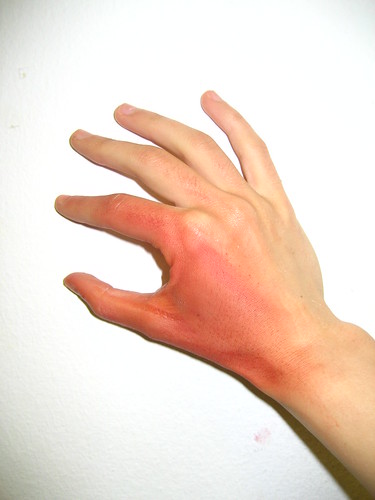 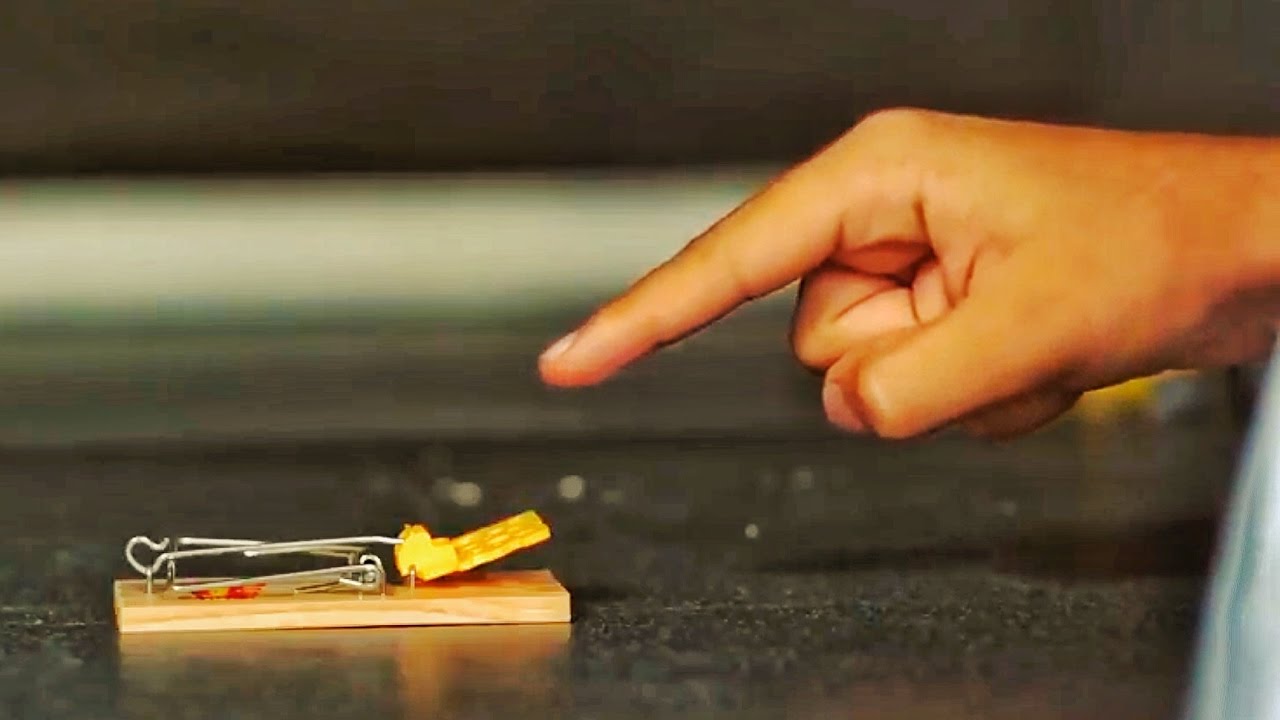 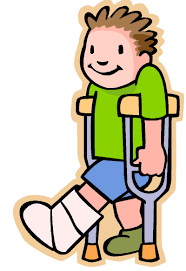 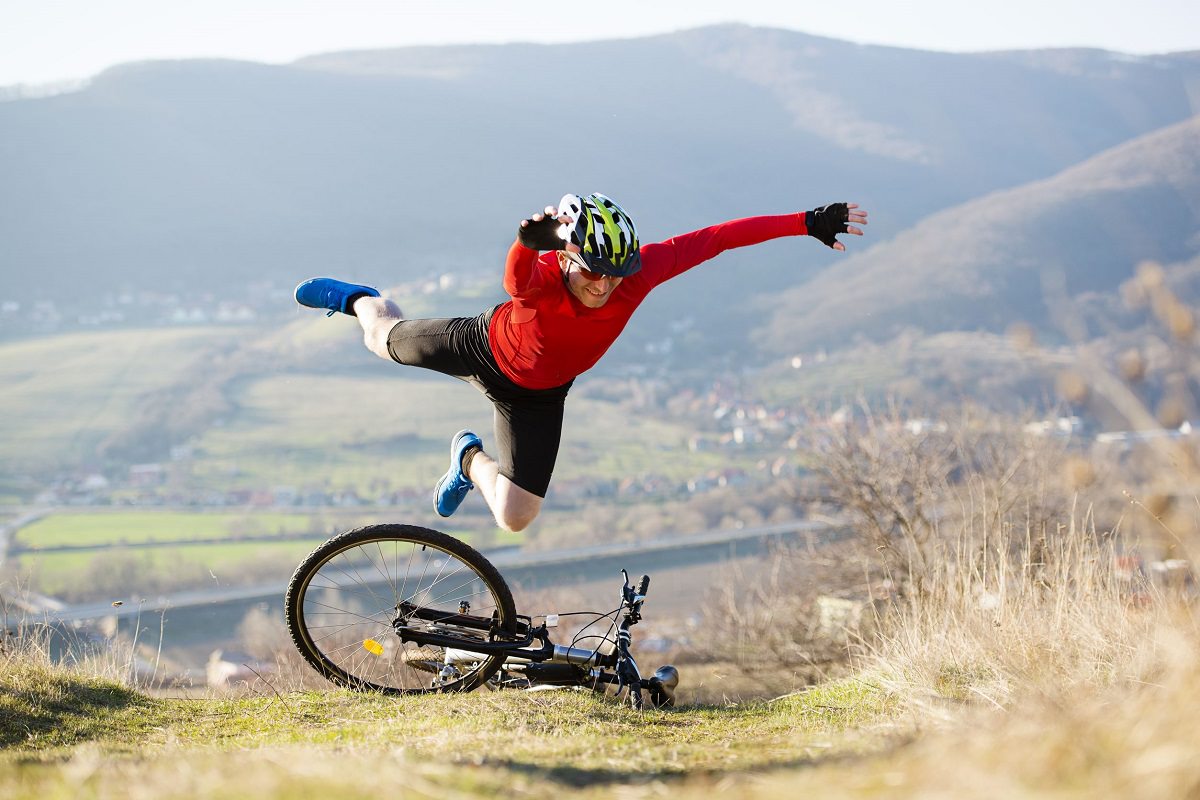 2.- Complete the sentences with injury words from exercise 1. Sometimes you need to change the form of the verb.

3.- Play miming with the class group. Mime the actions/accidents in exercise 1 and guess them.

4.- Work with a partner. Look at the accidents and injuries in Exercise 1. When was the last time these things happened to you or a member of your family? Explain how was it.

1.-Brainstorming: Name as many dangerous things one can find at home.

2.- Read and listen to the text while checking if the dangers in the brainstorming activity appear.

Parachuting or making dinner at home: which activity is the most dangerous? The answer will probably be a surprise: did you know that more than two million people have serious accidents in their own houses every year in the UK? Here we look at the most common accidents.

The bathroom is one of the most dangerous rooms in our home. A lot of people slip in the shower or the bath, especially old people. It’s very easy to break a bone in a bad fall.

A lot of accidents happen in the kitchen, in fact it’s the second  most dangerous room in the home, after the living room! Knives and open cans are particularly dangerous, but luckily most cuts aren’t very serious.

The greatest danger with doors is to your fingers.More than 40.000people visit the hospital every year because the’ve trapped their fingers in a door! Five per cent of these people lose a finger!

The biggest danger in the kitchen comes from hot liquids. Over 100.000 people a years go to hospital because they’ve burnt their hands, arms, legs or other parts of their body with hot liquids in the kitchen.

More than a million people go to hospital every year because of bad falls and most of them have fallen on the stairs inside their own home. This is the most common accident in the home. Ladders, windows and balconies are also very dangerous. So be careful!

3.- Reread the text. Are these sentences true or false? Correct the false sentences.

b) The kitchen is the most dangerous room in the home. ____

c) Most people only suffer minor injuries in the kitchen. ____

d) Most people lose a finger in accidents with doors. ____

e) Burns are more dangerous than cuts in the kitchen. ____

f) Falls from windows are more common than falls on the stairs. ____

4.- In pairs, answer the following questions:

a) What surprised you about the article?

b) Can you think of any other common accidents in the home? 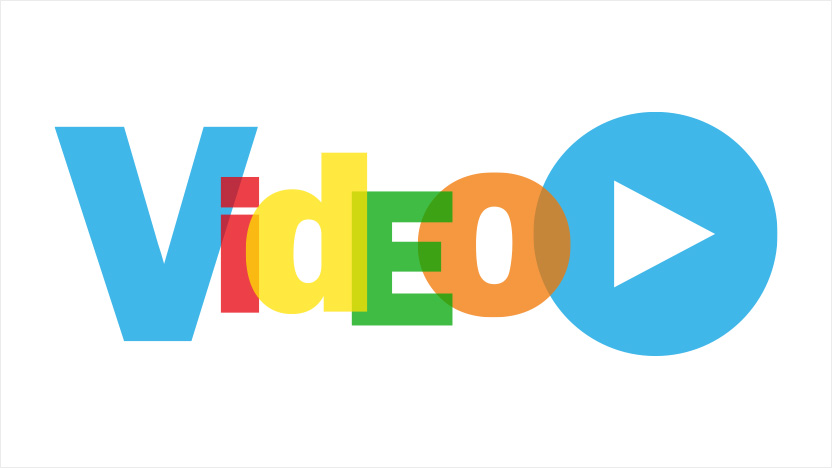 5.- Watch the video on Medical Myths and find out how everyday noises can be dangerous for our ears.

1.- Go to Edpuzzle and watch the video related to the Present Perfect that your teacher uploaded.

3.- Can you remember what’s the present perfect used for?

We use the present perfect for…….

4.- Time to practice! Complete the sentences with the present perfect of the verbs in brackets:

5.- Choose the correct options and put the verbs in brackets in the past participle form.

B: On an aeroplane. 6.- Think of five sentences about  what you have and haven’t done in your life. Two of the sentences must be false. Be ready to tell them to your partner. Guess his/her two false sentences too!

7.- Competition time: in small groups build as much sentences in the present perfect as possible with the cards the teacher will give you. Good luck!

1.- Watch the video in Edpuzzle on USED TO. Bring doubts for next day if any.

Rob and Alice discuss superstitions connected with nature. These are events that some people believe will bring them good or bad luck.

According to British folklore, eggs from which bird are meant to improve your eyesight? Is it:

Listen out for the answer at the end of the programme!

Rob: And this is 6 Minute English from the BBC. Today we’re talking about superstitions. Superstition is the belief that certain events can bring good luck or bad luck. For example, a lot of people think that the number 13 is unlucky, or that you can avoid bad luck if you touch wood.

Alice: Mm, in fact people even say ‘touch wood’ if they’re hoping for something good to happen.

Rob: That’s right. So Alice, are you superstitious?

Alice: Well I am, a bit. I don’t like walking under ladders for example.

Rob: Me too. Well, today we’re talking about superstitions involving birds and animals, and I’ve got today’s question for you. According to British folklore, eggs from which bird are meant to improve your eyesight?

Rob: OK, we’ll see if you’re right at the end of the programme.

Rob: But not to the rabbit! You used an interesting phrase there Alice: ‘off the top of my head’.

Alice: Yeah, off the top of my head. It’s a helpful phrase that means something you think of quickly, without much research.

Rob: OK, well let’s hear a few more British superstitions involving nature. Dr Paul Walton, from the Royal Society for the Protection of Birds, spoke to the BBC about some superstitions surrounding birds in Scotland. Here he is talking about seagulls and the traditions associated with them.

Alice: Seagulls or gulls – they’re the large grey and white birds that you find near the seaside.

Rob: So, according to Dr Walton, what superstitions are associated with gulls in Scotland?

Partly it must be because Scotland’s such a fantastic place for birds, I think over the years these superstitions have developed because these are the living things that we share our lives with. For example, there’s a long tradition in Scotland among sailors and fishermen of seeing the gulls that follow the boats as actually being the embodiment of dead sailors, and to kill a gull is still in many places considered to be very back luck.

Rob: He says sailors and fishermen consider it very bad luck to kill a seagull because gulls are the embodiment of dead sailors. Could you explain embodiment for us Alice?

Alice: Embodiment. It literally means to give something a body. So here it means that the seagulls have given physical bodies to the spirits of dead sailors – they’re the embodiment of the dead sailors.

Rob: So it’s bad luck to kill a seagull in Scotland because they’re the embodiment of dead sailors. Let’s listen to another bird superstition from Scotland. This is Paul Walton again talking about another of his favourite superstitions. Listen out for the bird noises in this clip and see if you can identify which bird he’s talking about. What you should do when you hear its call?

Rob: Did you hear the sound of the cuckoo? The cuckoo is a bird with a long tail and a very distinctive cry.

Alice: You can find cuckoo clocks in Switzerland, Germany and Austria, with the cuckoo making a distinctive cry every hour.

Alice: Oh dear. So surely you should walk away very slowly – then you’d hear more calls and live longer? It seems like a very odd superstition to me – it’s a real

Rob: You could be right – a lot of these superstitions are old wives’ tales; possibly including the one in today’s question. Now, if you remember Alice, I asked you, according to British folklore, which bird’s eggs are meant to improve your eyesight?

Alice: And I said swans.

Rob: Well, apparently it’s owl’s eggs that are meant to improve your eyesight. You’re meant to cook the eggs until they’re ash, and then eat them to get better sight.

Alice: Urgh, that sounds horrible; eggs made into ashes!

Rob: Yes, I wouldn’t recommend doing it. Anyway, before we go Alice, could you please remind us of some of the vocabulary we’ve heard in today’s programme?

Alice: Sure, we had: Superstition To touch wood

Knock on wood. A lucky charm.

Off the top of my head

Alice: See you next time!

3.- POST- LISTENING : Vocabulary cards: The teacher will give you a set of cards. Match the word/expression with the definition in pairs.

PARTS OF THE BODY

She slipped and broke both her ankles.

1.-Look at the picture and match the parts of the body with the words

1.- look at the photos of the animals and answer the questions. 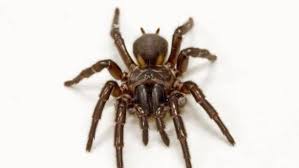 a) Which country do they live in?

b) Which is the most dangerous?

2.- Listen and check your answers: DANGER DOWN UNDER!

3.- Listen again and answer the questions.

a) Why are the koala bear and kangaroo special?

b) What do saltwater crocodiles eat?

c) In which city does the funnel web spider live?

d) What can happen when the spider bites a human?

e) Where does the inland taipan live?

f) How does the snake change during the year?

4.- Work with a partner. Answer the questions.

a) Are there any particularly dangerous animals in your country?

b) Have you ever had a bad experience with an animal? What happened?

5.-Watch the video and find out about a dangerous job in Australia. 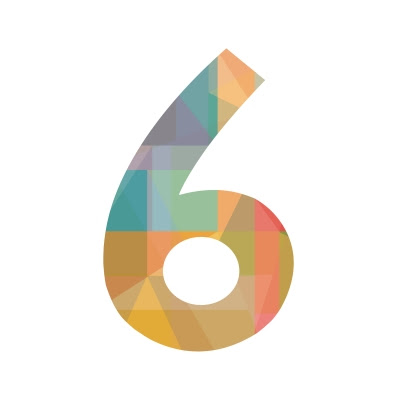 1.- Theo and Ben are talking about accidents. Listen and complete the conversation with the words in the box:

Theo: Good, thanks! How about you?

Ben: Well, my dad had an accident. He broke his ankle.

Ben: He was skiing and he crashed into a tree!

Ben: And then mum crashed the car!

Ben: Yes, she¡s fine, thanks. It’s been a terrible couple of weeks!

2.- Practice the conversation in pairs. Later, record it and upload it on this unit’s FLIPGRID theme in pairs (unit 7).

WRITING: AN EMAIL OF APOLOGY

1.- Do know what is an apology? No? Read the definition below. 2.- Read the email below and answer. What event is Ted planning? Why can’t Gemma go?

I’m really sorry but I can’t come on the trip this Saturday because I’ve injured my ankle! (APOLOGY TO START THE EMAIL + WHY YOU CAN’T GO…)

Last month I was playing in a basketball match when I slipped and hurt my ankle. I didn’t think it was serious so I didn’t see a doctor immediately. My ankle hurt for two days and finally I went to hospital. It was a bad injury and they put my leg in plaster – it’s very uncomfortable. I went to see the doctor again yesterday and he said that I need to rest for three more weeks! (EXPLANATION)

I’m sorry for not telling you before. It’s still difficult to walk, and it’s impossible to enjoy a theme park if you can’t walk! (A FINAL APOLOGY)

Sorry again! Can we meet another day? (PHRASE TO CLOSE THE EMAIL) 3.- Now you’ve read the email and noticed the parts, PLAN an email of apology to a friend explaining why you can’t go to an event. Write your email using your school gmail account and send it to the teacher! 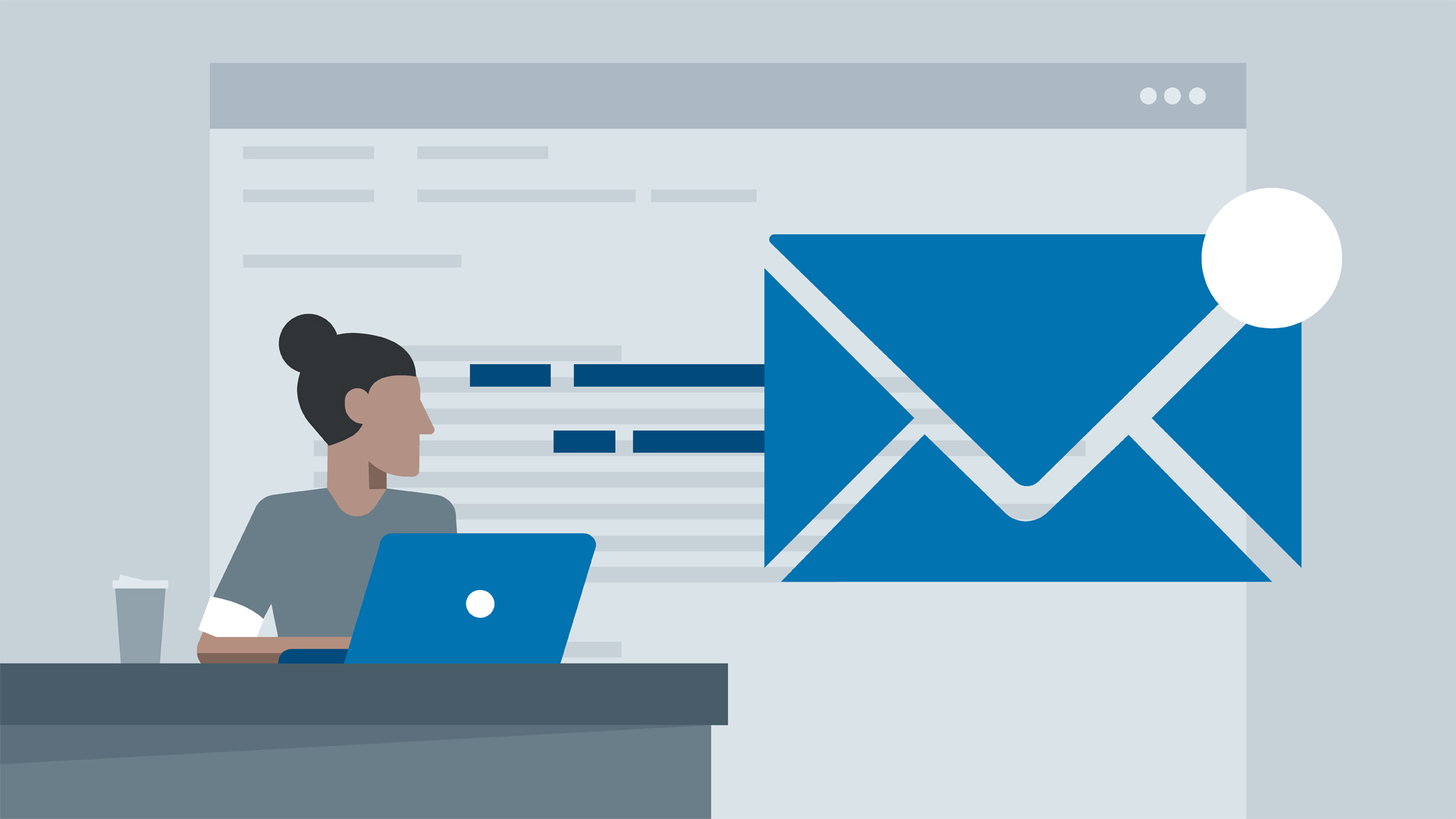