1.  Look at the pictures of rooms in a house, can you name the different objects in each room?

One object is not in the pictures, which one is it? The extra word is for this.. 2.  Look again at the words for furniture

3.  What are these objects?

Reading:  At home in the jungle

1.- Read while listening to the text below.

Look carefully at the photo, what can you see?  Where do you think this hotel is?

In the middle of the Amazon rainforest, amongst the monkeys, snakes and tropical birds there is a very unusual place.  Twenty metres up in the trees sits the Amazon Towers Hotel.  The biggest treetop hotel in the world.

The hotel has got 268 rooms, or “tree houses”, with beds, tables, chairs, a bathroom with a shower and balconies with amazing views of the Amazon rainforest.  The tallest tree house, the Tarzan house, is 22 metres high on a living mahogany tree. The hotel has also got a restaurant, a theatre and even a swimming pool high up in one of the trees.

The treetop hotel isn’t the only incredible thing to see in this part of Brazil,  The Amazon river is very near and visitors to the hotel can see the “meeting of the waters”.  Two of the most powerful rivers in the Amazon, the Rio Negro and the Rio Solimoes meet here.

Visitors can also see local tribes in the Amazon and discover the ancient culture and traditions of the Amazonian people.

At the end of a busy day you can return to the hotel in the trees, it’s not far, but it is a long way up to bed!  (that’s a joke)

The Amazon rainforest covers over (more than) five and a half million kilometres!  OMG!

A Cool Life (Find about an unusual house in Australia)

2.- Comprehension Questions. Answer them on your notebook.

1.- Which animals live near the hotel?

2.- How many metres up in the trees is the hotel?

3.- How many rooms has the hotel got?

5.- What unusual creature lives in the Rio Negro?

6.- What else can you visit near the hotel?

3.- Work with a partner. Answer the questions:

a) Do you like the idea of a treetop hotel?

b) When was the last time you stayed in a hotel?  Was it comfortable?

c) What do you like about staying in hotels?

Example: I like the idea of a treetop hotel because it’s an unusual experience….

1.- Watch the video in Edpuzzle on COMPARATIVES and SUPERLATIVES.

2.- Now, practice in class. Complete and copy the chart on your notebook. 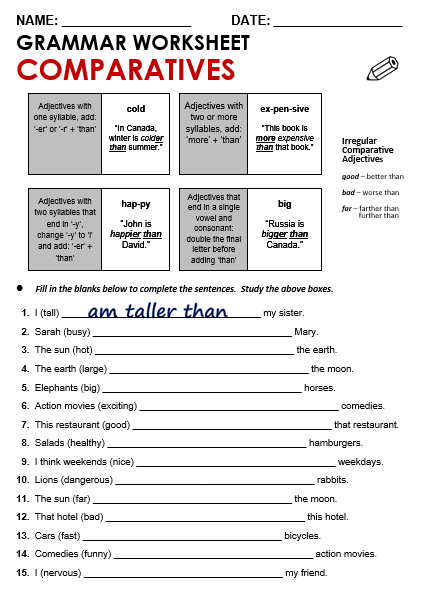 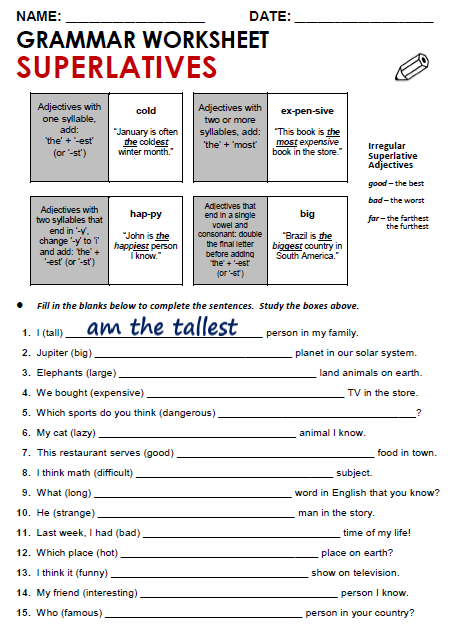 3.- Speaking in small groups: Play the card game given by the teacher. You have to compare two things and give reasons. If you do that you’ll keep the cards. The more cards you can keep, the better. The student who gets more cards wins.

4.- Watch the video in Edpuzzle on MUST/MUSTN’T and SHOULD/SHOULDN’T.

5.- Now practice. Click on the picture. They are linked to online practice: 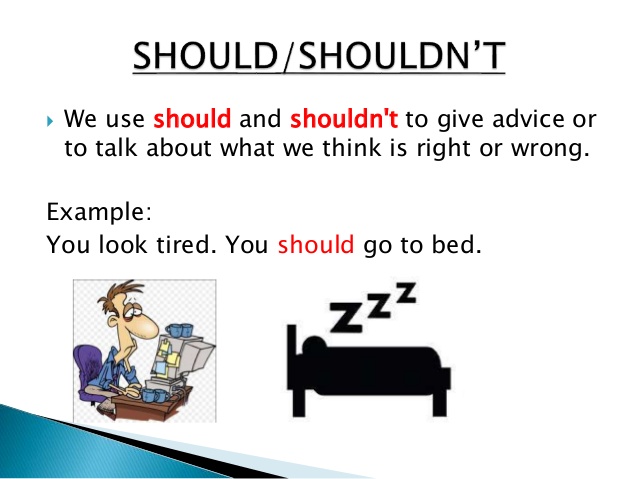 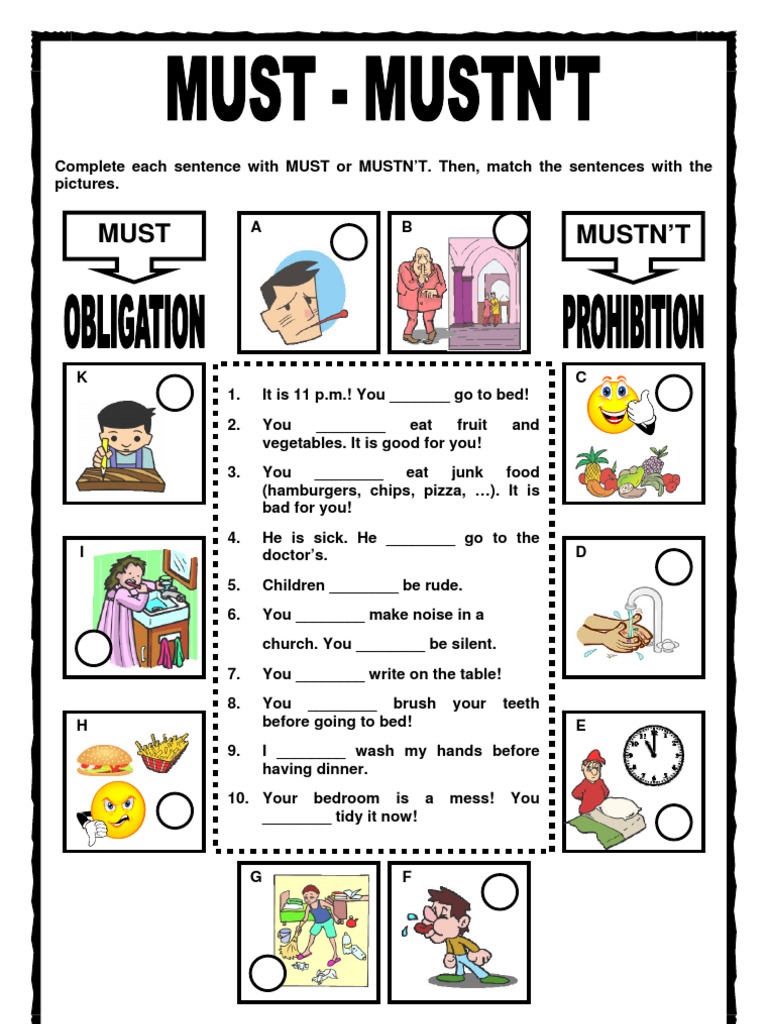 1.- Look at the photo of a kitchen. How many household appliances can you name? Write them on your notebook.

2.- Listen to Helen and her dad and check your ideas in Exercise 1.

3.- Listen again. Are these sentences true or false? Correct the false sentences.

a) Helen forgot to do her homework.

b) She thinks that housework is more important than school.

c) She washes the dishes by hand.

f) Helen’s dad gives Helen her pocket money before she tidies her room.

Remember HOMEWORK and HOUSEWORK are uncountable nouns, so you can NOT put them into the PLURAL!!!

“What Doesn’t Kill You (Stronger)”

You think you got the ________ of me
Think you’ve had the last laugh
Bet you think that everything good is gone
Think you left me broken down
Think that I’d come running back
Baby you don’t know me, cause you’re dead wrong

6.- Classify the comparatives/superlatives found in the lyrics : 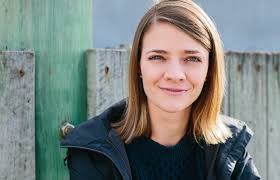 Could you imagine living on a bus? How about a boat? Well, Australian Jessica Watson has lived on both! It was while she was living on the boat that Jessica decided she wanted to become the youngest person to sail, solo and unassisted, around the world. With an infectious smile and a ﬁery passion for life, Jessica Watson has inspired thousands of young people across the globe. Australia’s ex-Prime Minister Kevin Rudd called her an extraordinary young Australian and the country’s “newest hero”.

Jessica has won the following awards:

This was the name Jessica gave to her boat, a 10.23 metre long Sparkman & Stephens. Before she had even begun her circumnavigation, disaster struck in the form of a collision with a 63 000 tonne bulk carrier ship. Luckily, Jessica was unhurt and Ella’s Pink Lady suﬀered only a broken mast.

Around the World in 210 Days

The following is a timeline of Jessica’s circumnavigation of Earth.

a) Where is Jessica Watson from?

b) Which two unusual places did Jessica live on?

c) How is Jessica’s boat called?

d) What happened to Ella’s boat after a collision with a 63 000 tonne bulk carrier ship?

e) How long did it take her to travel around the world?

2.- Now we are going to create an ACROSTIC POEM with the first name or second name of ONE INSPIRING WOMAN.

-Take a pencil and a blank sheet of paper.

-Read the Acrostic Poem given by the teacher as an example: JESSICA WATSON.

Every day an adventure

And never giving up!

-Now, start your writing and be ready to read them aloud in class!

FYI: The best poems will be included in the English page of our yearly school magazine. Good luck!

1.- Look at the photo of a houseboat. Why do you think people choose to live on houseboats like these? 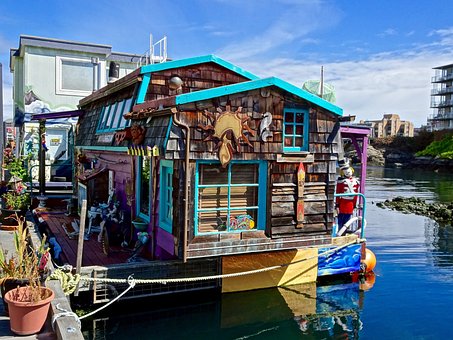 2.- Read the text on Houseboats published on the Encyclopaedia Britannica (online version).

Houseboat, in its simplest form, a cabin of one or two rooms built on a flat-bottomed scow, drawing only from 12 to 24 inches (roughly 30 to 60 cm) of water and usually with a platform or porch at either end.

Houseboats are found in great numbers on small rivers or streams—especially where there is good fishing—on the shallow waters of inland lakes, and in harbours along coastal regions. When used as summer homes, houseboats have developed into quite elaborate craft, having four or more rooms, with a broad porch or veranda on top protected by awnings. The hull construction still retains the characteristics of a flat-bottomed scow, having great stability. In this form the boats have no motive power and have to be towed from place to place when it is desired to change their position.

With the introduction of the internal-combustion engine, powered houseboats were developed and became popular because they could be moved from place to place easily. They combined the roominess and comfort of the houseboat with the convenience of the cabin cruiser. They are for the most part screw-driven and range in length from 45 feet (14 metres) to 100 feet (30 metres) or more. Being of shallow draft, they have living quarters in the superstructure, with large windows giving plenty of light and ventilation. These types of houseboats typically have broad decks, making them ideal summer homes. In the United States many of these power houseboats are used in northern waters during the summer months and taken south to Florida or the Gulf Coast during the winter months.

3.- Answer the comprehension questions on your notebook:

a) Where can you find a houseboat?

b) How many rooms do houseboats have?

c) What length do houseboats have?

d) Can you name any of the parts of a houseboat?

e) Which season is associated with houseboat life style?

IF YOU ARE CURIOUS ABOUT “HOUSEBOATS”, YOU ARE INVITED TO READ THIS ARTICLE ON THE GUARDIAN ON REAL PEOPLE LIVING IN HOUSEBOATS. CLICK HERE.

3.- Find out about a “travelling” house: MOVING HOUSE video.

ASKING FOR AND OFFERING HELP

1.- Josh and his dad are talking about housework. Listen and complete the conversation with the words in the box.

Dad: You always say that!

2.- Listen again and practice the conversation in pairs. Then, exchange roles.

FLIPGRID to DESCRIBE your HOUSE/FLAT! 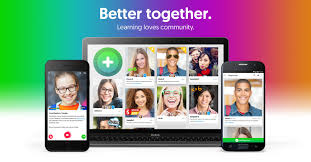 1.- Describe your house while using the new online tool: FLIPGRID.

2. Find the 2nd of ESO theme: DESCRIBE YOUR HOUSE. Read the description of the theme. You have the instructions there.

3. Prepare the text you need before recording the video.